Experience the excitement of racing these spectacular yachts through the opportunity to charter a Swan 60, giving you the chance to undergo the experience of a lifetime.

For further details regarding the charter of a Swan 60 for the full circuit, or single events, please contact: racing-office@nautorswan.com

The 2014 Circuit will begin with the third edition of the Nord Stream Race, with the Swan 60 fleet racing from Saint-Petersburg, Russia to Warnemünde, Germany via a stopover in Helsinki, Finland. The second World Championship will then take place in August, running alongside the Copa Del Rey Mapfre in Palma, Spain. The Circuit will finally conclude with the Rolex Swan Cup in September, in Porto Cervo, Sardinia.

Owner of Swan 60 Bronenosec and winner of the Gazprom Swan 60 Class Circuit 2013, Mr Vladimir Liubomirov commented on his 2013 win;

“It means a lot for our team to win this year; from the beginning it was very important for us to win as we wanted to prove that we are a strong team and to continue last year’s success. We had a great year in 2012 and we wanted to maintain that standard this year. We did our best and worked really hard in each of the regattas and races; in my mind the prize is greatly deserved, my team worked extremely hard. There were many highlights for me during the Circuit, I especially enjoyed sailing in the beautiful Solent for the first time in my life; it was incredible and I was deeply impressed by Cowes and its old sailing traditions.”

""We had a really close race and it was great fun for everyone – we had much closer racing than I think we were expecting. The whole fleet being so close for so many days was a unique experience and led to some very competitive moments! Sailing the Swan 60 was good, it’s great as it is a one-design Class and everyone is really equal in speed which makes for a great racing. The whole of the Nord Stream Race was really was competitive, right to the end, the two Swan 60s finishing just 26 seconds apart shows that, it made it a lot of fun for the sailors.""

“It was such a fantastic race onboard Swan 60 Tsaar Peter, we made some right decisions in the tactical department at the right time. The boat moved fast, everyone was working hard and three of the teams; us, Swan 60 SGM and Swan 60 Bronenosec were so close together for a great deal of the race, it made it very exhilarating and we gave it our all. We experienced great boat handling, and the Swan 60 sailed really fast, everyone worked really hard together to achieve great results.” 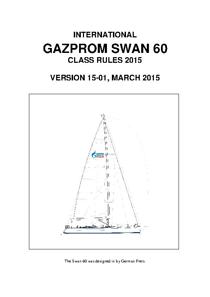 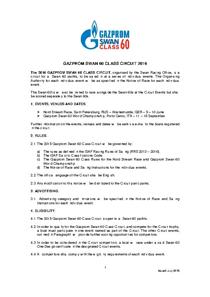